You can choose one main color for your website design ! 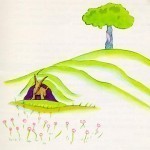